Why choose to take your English course in Manchester?

You would like to come to the UK to learn English. It is a big decision deciding which city to study in, isn’t it? There are so many great options.

Let us tell you the top 8 reasons we think you should choose to take your English course in Manchester.

The Cost of Living – it’s cheaper in Manchester

You might not know this, but the cost of living in London is 55% more expensive than it is in Manchester, according to Expatistan.com . This means that studying English in London is the most expensive place to study English in the UK! Manchester is the 2nd cheapest city in the UK (topuniversities.com).

With three universities, Manchester has one of the largest student populations of the UK. The city is very welcoming to students, both from the UK and international students. A warm Manchester welcome awaits!

There are many different areas of the city for different kinds of nightlife. In the Northern Quarter you can find trendy bars playing cool atmospheric music until late at night; in Deansgate, a large number of fancy cocktail bars; down the road from Deansgate, you find Deansgate Locks: a hub of nightclubs playing all different genres of music until the early hours of the morning. Even if you don’t drink, you can meet your friends in the cafés and shisha bars of Rusholme, and talk until sunrise!

Whatever the vibe you are searching for, you will find it in Manchester!

Middle-Eastern, Indian, South-East Asian, Italian (and even British!). Whatever you would like to eat, it’s on the menu in Manchester!

In 2019, Manchester saw a large increase  in the number of bars and restaurants in the UK, with an increase of 22%. This was more than 3x the increase seen in London! From the classic British décor and warm spiced food of “Dishoom”, to the modern extravagance of “The Ivy”, and the Michelin-starred “Mana”, wherever you make a reservation in Manchester, it will not disappoint!

And we also love an international dinner party in school! We hold them regularly as part of our social programme. Students and staff share food from all over the world.

If you are an international student, what do you normally think of when you think about Manchester? For many, it is ‘Manchester United’, and ‘Manchester City’. Every week, there is a big match in the city. And it’s not just Manchester United and Manchester City that play here! Manchester often welcomes the biggest football clubs in the world for its Champions League games: Atletico, Bayern Munich, FC Barcelona, Real Madrid, Liverpool, Chelsea all regularly come to Manchester to face the Reds and the Blues!

All of our members of staff can help students with the common question: ‘Where can I watch football in Manchester?’. International House Manchester has close links with “Smile”, a tour company, from whom students can buy tickets to the biggest football matches.

In addition to this, the National Express bus station is located directly outside the school, so you can walk out of lessons and be on a bus to anywhere in the UK within 5 minutes!

You can explore the whole UK from Manchester

With its central position and excellent public transport links, your stay in Manchester can be a gateway to the whole UK! In two and a half hours or less, you can visit London, Leeds, Chester, Sheffield, Liverpool, York, Birmingham, North Wales, the Lake District, and the Peak District, to mention a few! There are so many amazing day trips from Manchester.

Our friendly team of staff can suggest beautiful places to visit around the UK, and we can help you organise your trips using our native knowledge! Additionally, we work closely with “Smile Adventures”, who run economically priced trips around the country.

Not only this, but there are more than four different bus companies providing transport in and around the city, as well as an extensive tram system and inter-city trains. This means that getting around the city is easy.

So what are you waiting for?! You can get all the benefits listed above, and many more, by studying English in Manchester!

PrevPreviousLiverpool Day Trip
NextDo you want to Improve your English For Speaking?Next 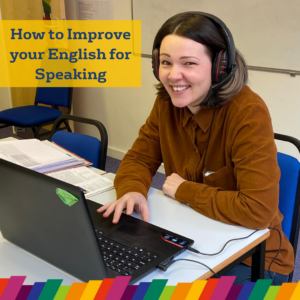 Do you want to Improve your English For Speaking? 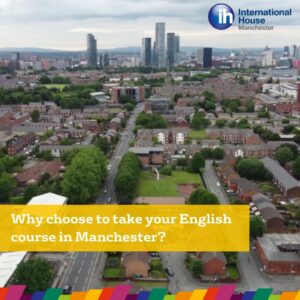 Why choose to take your English course in Manchester?

You would like to come to the UK to learn English. It is a big decision deciding which city to study in, isn’t it? There