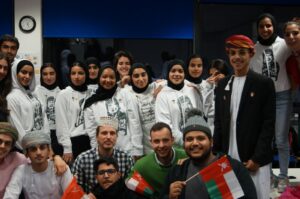 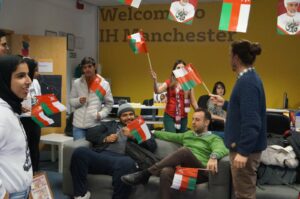 National Day (Arabic: اليوم الوطني العماني, alyawm alwataniu aleumaniu) is an official holiday in the Sultanate of Oman and the main one in the country. The holiday currently celebrates the History of Oman and specifically its independence from the Kingdom of Portugal. It also celebrates the official birthday of Sultan Qaboos bin Said al Said.

The Portuguese first arrived in the country in the early 1500s, and used the now capital of Muscat as a fortified port to protect their trade routes to India. Unhappy with a Portuguese presence that exploited Oman, the Al-Ya’ribi clan agreed a treaty with the British East India Company to allow the British to have rights in their ports, in a rebuke of the Portuguese government. On November 18, 1650, Imam Sultan bin Saif led a rebellion that expelled the Portuguese from Oman and its ports. This made Oman the oldest independent state in the Arab world to ever exist.

IH Manchester has a long history of working closely with Omani students and the Oman Embassy as these young people work to improve their English language skills in readiness for undergraduate study at universities in the UK. The young Omani students work towards taking their IELTS examination in Manchester. IELTS exam preparation has become the specialism of IH Manchester as academic staff have built their expertise in helping students achieve the highest possible marks in the shortest available time. IH Manchester offers a specific IELTS examination preparation course which includes attendance at a weekly IELTS club and specific IELTS exam technique lessons.